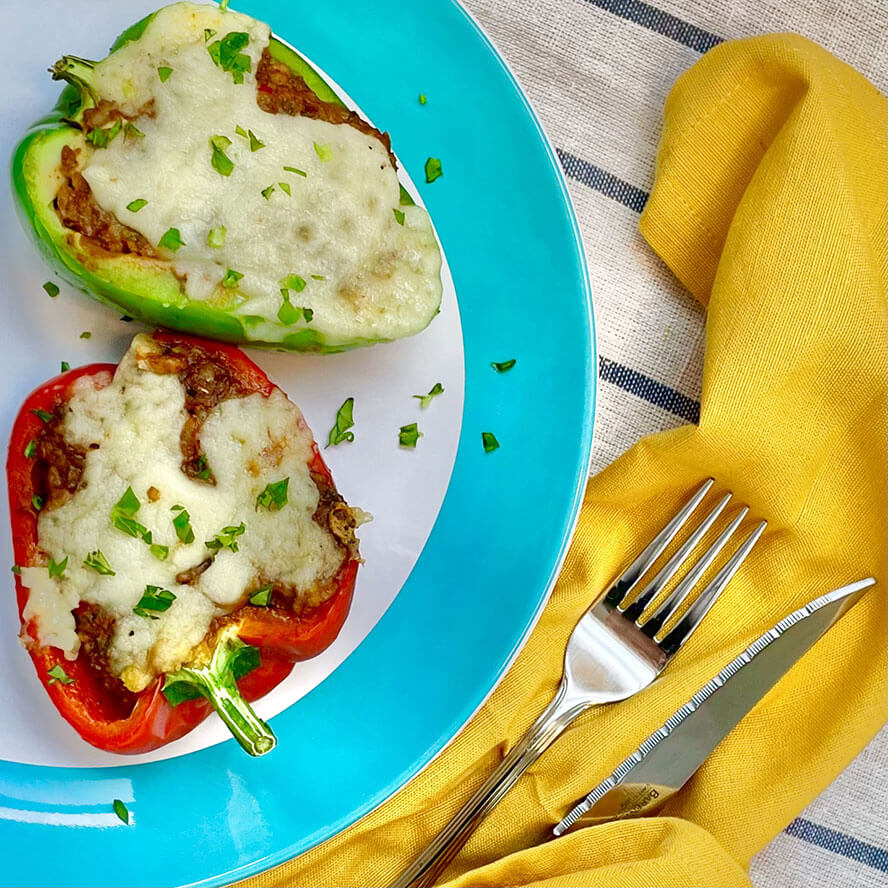 Cheesy Chorizo Stuffed Peppers that are 100% Plant-Based
I always found traditional stuffed peppers to be a bit bland and boring. That’s why I spiced this recipe up with a chorizo twist. The other twist is that this recipe is completely plant-based!

The chorizo is made of lentils, walnuts and an flavourful spice blend. I also stuff the peppers with rice, tomatoes, parsley and Prairie Melt plant-based cheese. You will find that these peppers not only present beautifully but are also rich, tasty and satisfying.

Cutting the peppers: You can either cut the tops off the peppers or cut them sideways before stuffing. I prefer the latter method, as they cook faster and you get more surface area for the delicious cheese to melt. Once the pepper is cut in half, use a pairing knife to cut just below the stem and remove the core and ribs of the pepper. It helps to tap the pepper face down on a cutting board to remove any extra seeds. I like to keep the stem in tact for nice presentation and to keep the structure of the pepper.

Presentation tips: If you are serving up a platter of stuffed peppers, it really looks nice to have 2-3 different colored peppers. They still look great if you only have one color, but having red, green and yellow is a nice touch. Garnishing the stuffed peppers with fresh parsley or microgreens looks amazing as well.

Ingredient swaps that work great: You can always swap the rice in this recipe for any other grain. Quinoa, wild rice, barley and farrow are great alternatives. Alternatively, you can swap the walnuts in the chorizo recipe out for pecans. If you have a nut allergy, pumpkin seeds will work but I recommend processing them first before adding the other ingredients so that they grind fine enough.

Make ahead: This is a great recipe to make ahead of time. The peppers will keep stuffed for at least a week raw in the fridge. Meal prep them on Sunday and simply pop them in the oven during the week for a quick, tasty dinner. Any leftovers also make a great boxed lunch the next day.

Let’s get making some stuffed peppers!

Good Stock is closed from January 1st - January 10th
We will see you again in the new year!
Orders are closed during this time.
Reopening Tuesday on the 11th.
Orders may be placed for opening day.

We're making a few changes to our website. Check back soon!